I'm going to take a little break from sharing Spellbinders Pick of the Week samples with you because on Wednesday I'm on Create & Craft with some stamping shows. The theme is Cars as you can see below. I've used some of the dies from the recent Pick of the Week on some of the samples I've made just to show you how these stamps work with the dies that many of you have purchased. 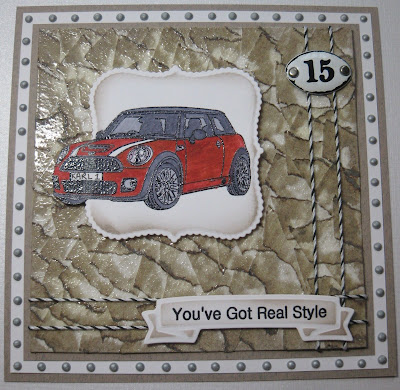 There's a couple of great techniques that I've learned from Sue Wilson on this one. The first one is on the background. I think Sue calls it the Faux Leather Technique. I cut a square of card (can be any card, any colour). I tore some pieces of masking tape and covered the card with them, making sure they overlapped. Once the whole area was covered, I folded the excess over to the back of the card. I then took a Pumice Stone Distress Ink Pad and rubbed it over the surface. There were some areas that the ink didn't reach - that's fine. I sprinkled some Cosmic Shimmer Clear Embossing Powder over the top and heat set.

I stamped the image from the Creative Expressions Dream Cars Stamp Set using Jet Black Archival and embossed with clear powder. I coloured the image in using Cosmic Shimmer Matt Drawing Inks - I used Scarlet Flame from the Autumn Shades Set and Black Night from the Summer Fayre Set. Next I cut the image out using Spellbinders Scalloped Labels One and the Out of the Box technique that Sue has shown on TV. To do this you place the die over the image and draw around it, missing out the bit where the car overhangs. You then cut around the part of the image that is outside the die plus a bit further in. You need to be able to slot the die over the drawn lines but with the overlapping bit in the front of the die away from the cutting edge. You then pop it through your Grand Calibur and cut and emboss as usual. If you've not tried this before, I suggest you try it with an un-coloured image just in case you get it wrong! Don't worry if you don't understand all that - I've taken step by step pics of another card with this technique which I'll share very soon. 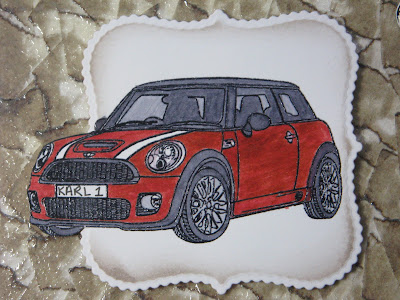 I inked while still in the die with Pumice Stone Distress Ink. The number plate is blank so you add your own message.

I stamped the sentiment from the same stamp set using Jet Black Archival and embossed with clear powder. I cut it out using Spellbinders Ribbon Banners and inked through the die with Pumice Stone. 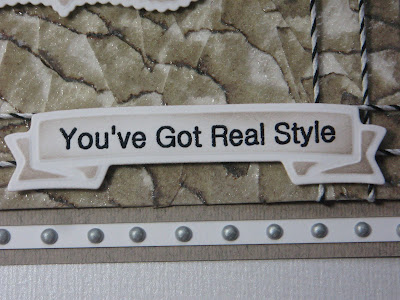 I wrapped some Black & White Baker's Twine around the card as shown. I added an Idea-ology Plaquette (will be on the show). I really like these as they are random numbers so can be used for any occasion. 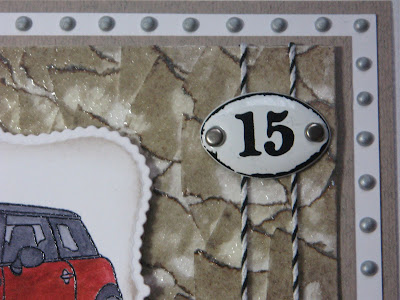 I finished the card off with some dots of Cosmic Shimmer Pearlescent PVA in Silver Lustre.