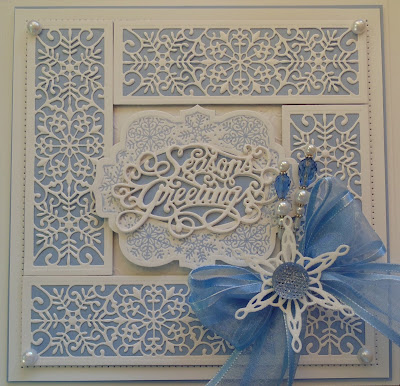 I think I pinched this idea from John Lockwood - I know I've seen a Striplet frame somewhere!

The background, which you can just about see, is a piece of Coconut White Card run through the Grand Calibur with the Creative Expressions Swirling Holly Embossing Folder.

I then cut the outside die only from Sue Wilson's Snowflake Mini Striplet 4 times out of Blue Dusk Card. I cut both of the dies in the set together out of Coconut White Card 4 times. I glued the White die cuts onto the Blue die cuts using Cosmic Shimmer Dries Clear Glue. I popped some 3d Foam on the back and arranged them around the background as shown. 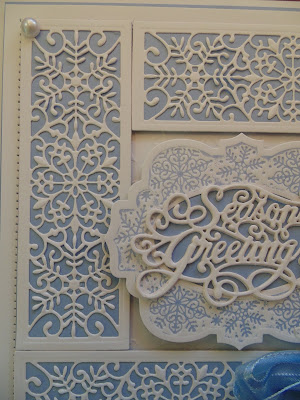 I dusted a piece of Coconut White Card with my Anti Static Pad and placed it dusted side up onto my tan mat which was on my pink plate. I inked up the deboss die in Sue's Deboss Snowflake Die Set using Clear Perfect Medium, placed it inked side down onto my dusted card, base plate on top and ran it through the Grand Calibur. I carefully removed the die, added Phill Martin Cosmic Shimmer Decadent Denim Embossing Powder and heat set. I removed the excess Mica Powder using a Dry Wet Wipe. I then used the dies either side of the deboss die to cut out the frame. I used the largest die only and cut out of Blue Dusk Card.

I cut Sue's Seasons Greetings Die out of Coconut White Card 3 times and glued them on top of each other. 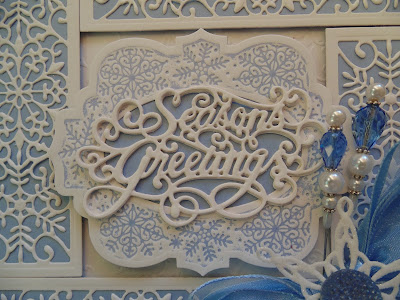 I tied a bow using Blue Satin Edged Organza. I popped a piece of Creative Expressions Double Sided Self Adhesive Sheet onto some Coconut White Card and cut one of Sue's Snowflakes. I peeled off the other piece of backing paper and added Cosmic Shimmer Diamond Snow Glitter Jewels. I added a Blue Dazzler to the centre. 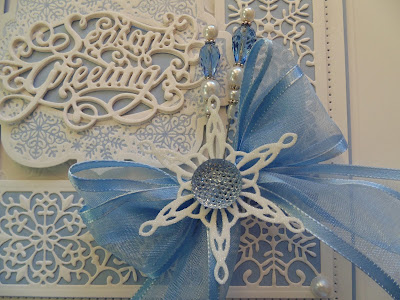 I assembled the card as shown adding some 8mm White Pearls and piercing around the edges.

Julia.
www.juliawattscrafts.co.uk
Ask for a free card when you order in August!