Enjoy your day and lots of news!

Today's blog post is a bit of a lengthy one with a pile of newsy bits at the end. 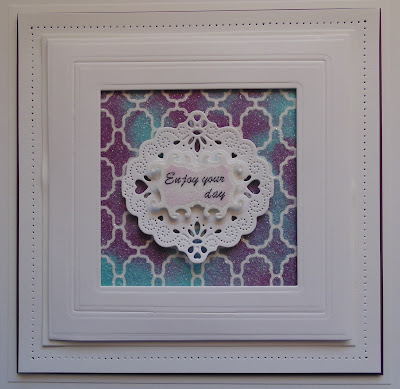 The background of this one is always a really popular demo. It's a version of Sue's Fire & Ice Technique but with Mica Powder instead of Gilding Flakes.

I started by cutting the Spellbinders Grate Effect Card Creator die (just the decorative inner die, not the outer frame die) out of Coconut White Card. I used the Spellbinders Tool n One on the back of the die cut to remove the 'hairy bits' that you often get around the edges of the design. I placed a piece of Creative Expressions Double Sided Self Adhesive Sheet on the front of the die cut. On the back, I added Phill Martin Cosmic Shimmer Decadent Grape and Decadent Teal Mica Powders, spreading them all over the sticky areas with a Soft Dusting Brush. I removed as much of the excess Mica Powder as possible and then sealed the whole area with another piece of card. I turned the piece over, removed the other backing sheet from the adhesive and added Cosmic Shimmer Diamond Sprinkles all over. 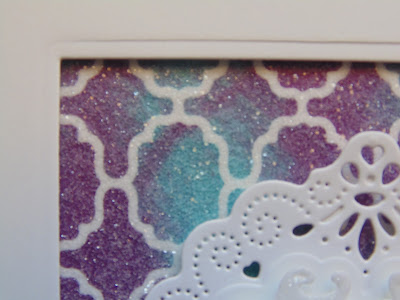 I made a frame out of Coconut White Card using Spellbinders 6 x 6 Matting Basics B. I laid 3 of the dies on my card and ran them through the Grand Calibur with the emboss sandwich first. I then removed the middle die and ran the remaining 2 dies through the Calibur with the cut sandwich. I cut a mat out of Coconut White Card using the largest die in the Spellbinders 6 x 6 Matting Basics A Die Set. 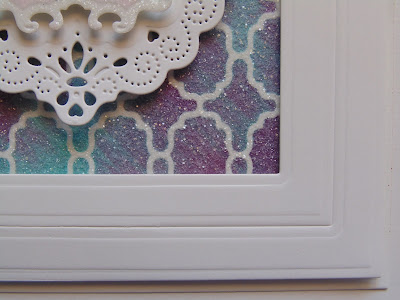 I stamped the sentiment from John Lockwood's Tulip Elements Stamp Set using Jet Black Archival. I added a small piece of  Creative Expressions Double Sided Self Adhesive Sheet ovet the top, peeled back the top backing sheet and rubbed Cosmic Shimmer Diamond Snow all over. I cut it out using the smallest die in the Spellbinders Pierced Delight Die D-Lite Die Set and inked through the die with Seedless Preserves Distress Ink. I cut the largest die in the same set out of Coconut White Card. 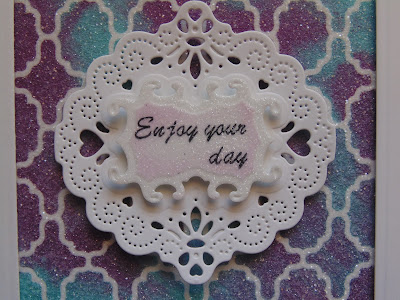 I assembled the card as shown, piercing around the edges with my Tim Holtz Ruler and adding a mat of Rich Plum Card.

I am really excited to announce that Phill Martin has asked me to join him on his next Craftathon in Nottingham on Sunday 30th August. When I spoke to Phill yesterday, half of the places had already gone so you need to book early if you'd like to join in the fun. Details below - 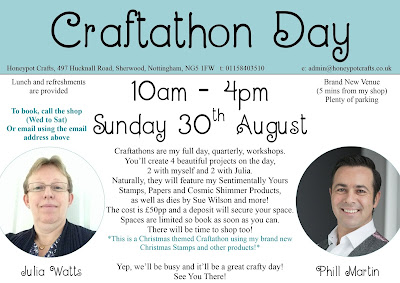 I did promise some pics from my holiday so here they are. I'll share the links as Kathryn posts on her blog or you can follow her blog at anytime here.

We stayed at a new hotel in Analipsi in Crete called Insula Alba Resort & Spa. Sounds very posh, doesn't it? Well, it was pretty posh and we were well chuffed when the coach dropped us off there just after midnight. However, the hotel has only been open 3 weeks (I think) and they are having some teething problems as you would expect - none of which actually ruined our holiday. Irritating - yes, but it supplied us with quite a few stories to tell!

Anyway, the view from our room  - 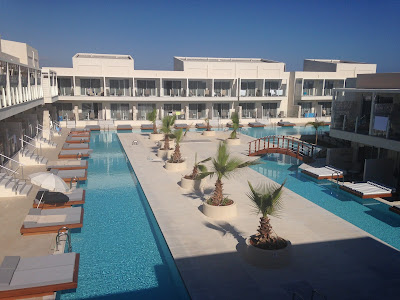 The rooms on the floor below were swim up rooms - an extra £500! 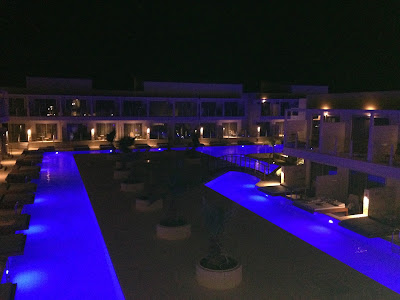 We could just about see the sea from our balcony - 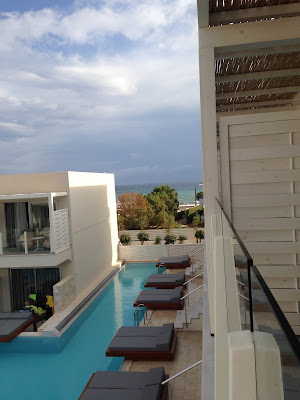 The hotel from the beach opposite - the pool bar and pool. Our room was behind the block on the left. 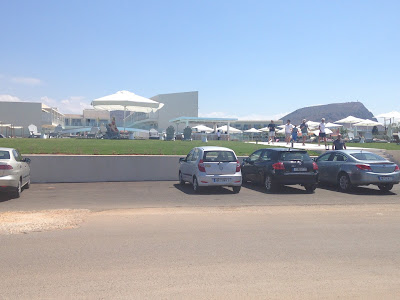 Had to have a paddle in the sea on the first day! 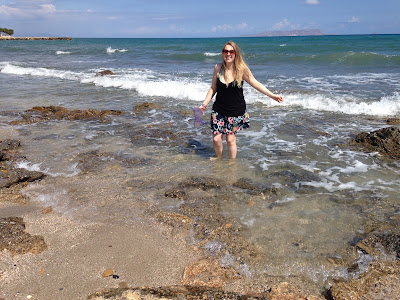 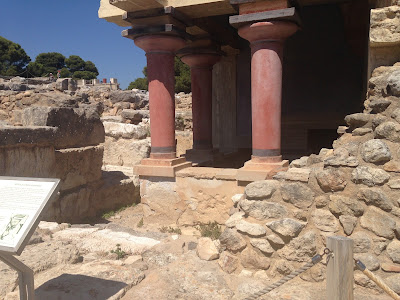 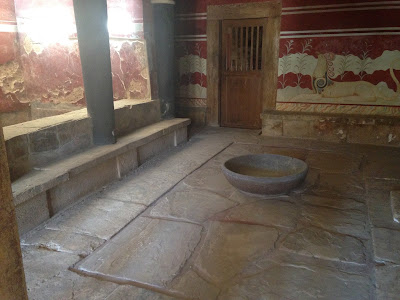 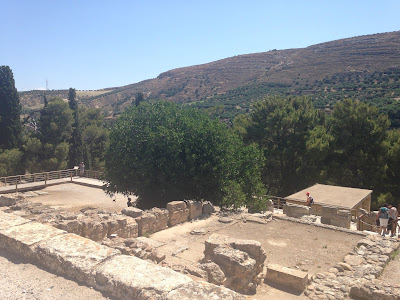 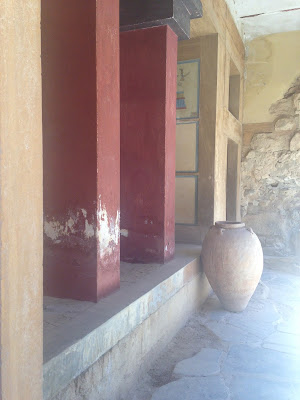 Then on to Heraklion for lunch and a trip to the Museum to see the bits collected from the Palace. 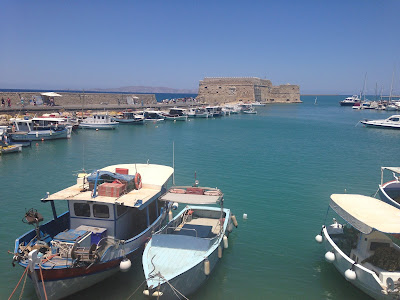 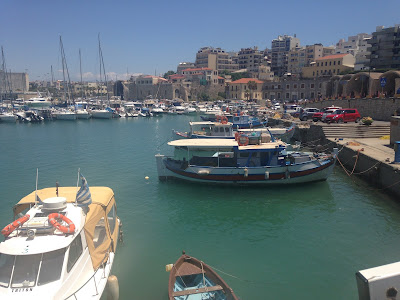 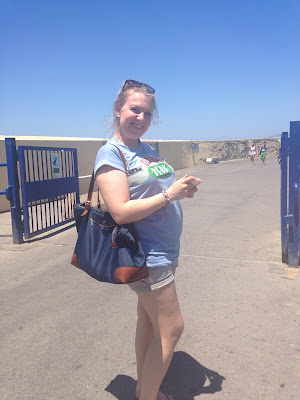 On Monday we had an early start and caught the ferry to Santorini. 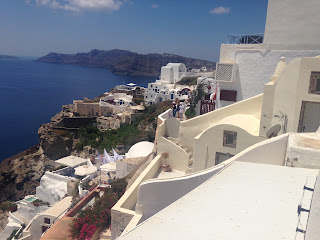 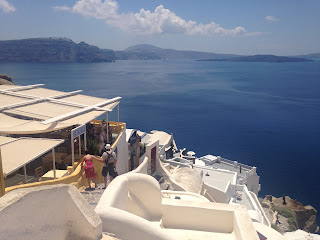 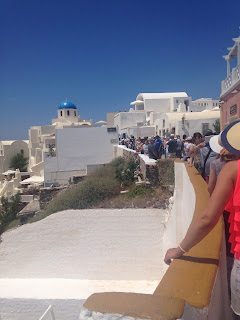 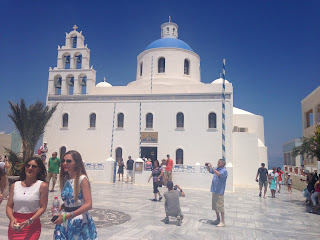 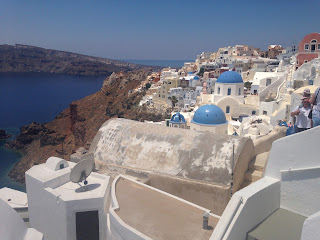 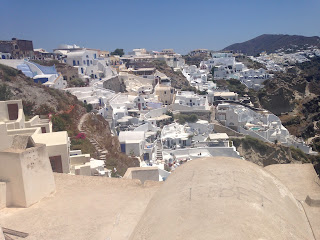 Kathryn wanted to swim in the 'hot spring' water next to the Volcano Island just a short boat ride from Santorini. The water wasn't clear and a bit yellow! 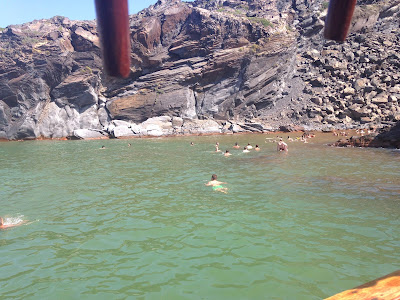 Kathryn's photos are much better than mine and she tooks loads so watch out for them on her blog soon!

Today is the final day of the launch of Sue's Festive Dies on her blog and the last day of 10% discount on the same dies on my website here. Remember to enter FESTIVE in the Coupon Code at checkout to receive your discount. Offer ends midnight today. Free postage on orders £20 or over (UK only).

Finally, just a reminder that I have a workshop at Creative Expressions on Tuesday July 7th, Yardley Gobion near Milton Keynes on Saturday July 18th and at That's Really Crafty in Loughborough on Monday July 27th. Details are on the workshop page of this blog here.

Well, I think that's about all for now. Be sure to stop by later to see if you've won one of the Giveaway Cards.