Thanks for all your emails yesterday - there were loads! As always, your support is much appreciated. I did make a bit of a mess of the last demo though - worst demo I've done on tv so far, I think. I know what went wrong with the snowflake though (I think). I assumed that the double-sided adhesive sheet was stuck on the card. However, I think it had just attached itself at the corners to fool me and the backing of one side hadn't actually been removed which meant that it was harder for me to cut and when I took it out of the die, it wasn't stuck to the card. I was quite tired by then so didn't think to double check it. Pity as I think that's the show that was scheduled to be repeated over night.

Today's card is another from the Card Creator shows. 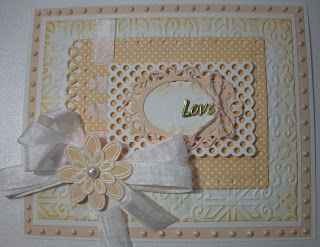 For the background, I simply ran a piece of Coconut White Card through the Grand Calibur with the Spellbinders Ornamental Iron M-Bossabilities Folder. I ran it through a second time to extend the pattern and then inked around the edges with Dried Marigold Distress Ink.

I cut the largest of the Fancy Ribbon Threader dies out of Foundations Dot and Dash Paper and threaded some Blue White American Seam Binding through it.I cut Polka Dots out of white card and at the emboss stage added the Floral Vines Mask. I inked through the die with Dried Marigold. I cut a frame out using the Jewel Framed Sentiments Set and a 'Love' out of Brass Metal using the same die set. I added a bow tied from the Pastel Baker's Twine Set. 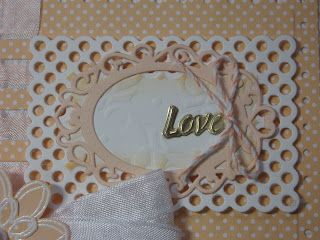 I tied a messy bow using 3 lengths of Blue White American Seam Binding. I stamped 2 flowers from the Button Florals stamp set on to Peach card and embossed them with Cosmic Shimmer True White Embossing Powder. I cut them out, layered them up and added an 8mm White Pearl. 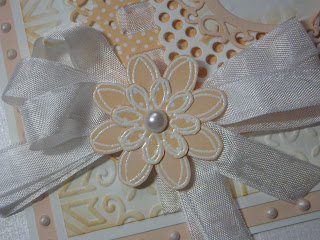 I assembled the card as shown and added some dots of Cosmic Shimmer Pearlescent PVA in White.

Posted by Unknown at Wednesday, September 26, 2012