This is the card that I messed up when I demoed it last week so I thought I'd explain how it should be done here! 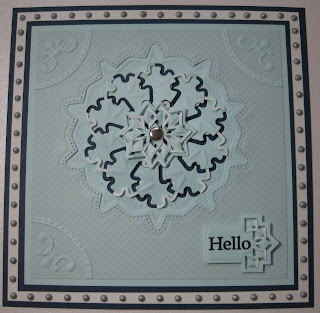 So, first I cut the aperture out of Foundations patterned paper using the backing die from the Spellbinders CFT Puzzle Effect Die Set. After I had embossed it, I left the die in place and then placed the piece over a larger piece of Foundations Shades Paper. I placed the corresponding CFT die inside the aperture, secured it and then removed the aperture piece including the backing die (this is what I forgot to do in the demo). I ran the CFT die through the Grand Calibur, embossed it and the folded and tucked in the appropriate places.

I cut 2 of the little corner style pieces out of Foundations Shades paper using the CFT Diamond Strips & Accents die set, folded and tucked them and then put them together securing with a brad. 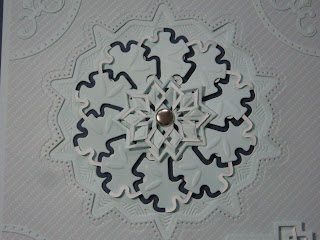 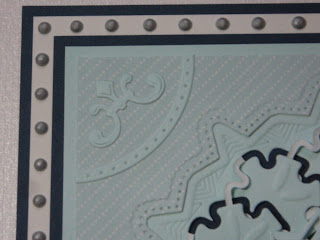 I stamped the sentiment from the Creative Expressions Trees of Imagination Stamp Set using Jet Black Archival and embossed with Cosmic Shimmer Clear Embossing Powder. I cut it out using the tag die from the Diamond Strips & Accents die set and folded and tucked. 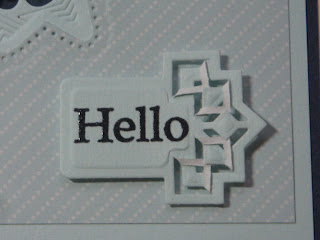 I assembled the card as shown and added some dots of Cosmic Shimmer Pearlescent PVA in Silver Lustre around the edges.