Many thanks to those of you who tuned in to the Spellbinders Shows yesterday. Your support is greatly appreciated.

Today I'm sharing a card that I demonstrated in the 7pm show yesterday. 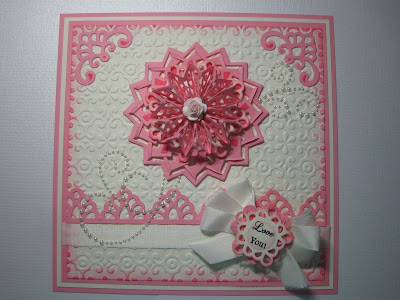 I made the rosette for the centre first as it needed time for the glue to set. I cut 2 borders out of pink card using the Spellbinders Moroccan Accents die set. I did not bother to emboss them. I then scored at every mountain point and every valley point and folded with all the mountain point folds being the mountain folds (hope that makes sense). I then glued the folded borders together overlapping at each end. I cut a motif from the same die set out of milk card and inked the edges with Worn Lipstick Distress Ink. I added some super sticky tape to the centre of the motif. I bunched the folded borders up so that the fancy edges were all in the centre making a rosette shape and then placed onto the super sticky tape. I then added some Cosmic Shimmer Dries Clear Glue and put aside to dry.

I cut the largest and the smallest of the Spellbinders Spectacular Spin Cut, Fold and Tuck dies out of pink card. I inked through the die with Worn Lipstick. I then folded as per instructions on the pack. (In the show I used Carnival Dreams as the bundle with Spectacular Spin had sold out.) 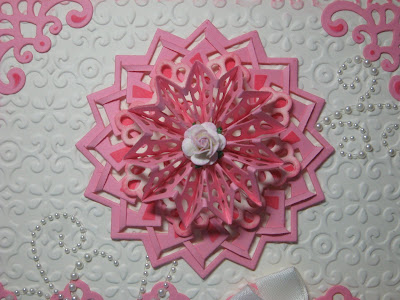 I stamped the sentiment from the Creative Expressions Warmest Wishes Stamp Set using Jet Black Archival and embossed with Cosmic Shimmer Clear Embossing Powder. I cut it out using a small motif from the Moroccan Motifs die set and inked with Worn Lipstick while still in the die. 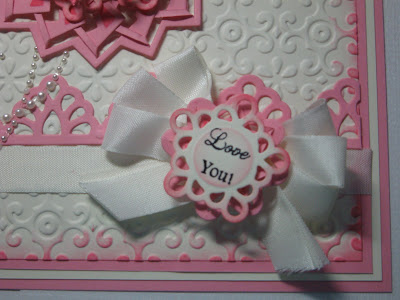 For the background, I ran a piece of milk card though the Grand Calibur with the Elegance M-Bossability Folder. I ran it through a second time to extend the pattern. I inked around the edges with Worn Lipstick.

I assembled the card as shown adding a Creative Expressions Pearly Swirly, a rose from my stash and some American Seam Binding in Chalk White.