Here's another card based on a card made by Sue Wilson. It was a demo for the shows that I did last week but never made it to the counter as most of the dies used on it were early sell outs. 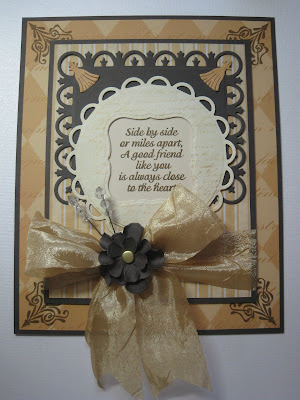 I cut the largest of the Spellbinders Fleur De Lis Rectangles out of brown card. I cut the largest of the Lacey Circles out of a patterned paper (My Mind's Eye) but also cut an aperture out of it using Labels One Small. I stamped my sentiment using Coffee Archival but did not emboss it. I popped this behind the aperture in the lacey circle. If I had demonstrated this card I would have inked around the sentiment with some Tea Dye Distress Ink as I think it's a bit pale against the backing paper I chose for the circle.

I cut 2 tassels from the Banner Basics Three die set and popped one in each of the top corners of the Fleur De Lis Rectangle. 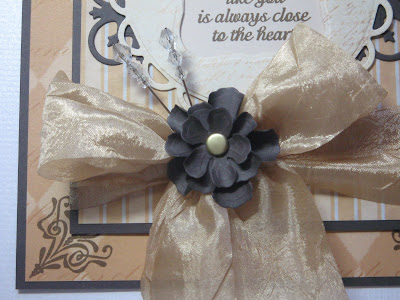 I wrapped some Champagne Silky Crush Ribbon around the smaller section of the card and tied a big bow. I made a flower using 3 of the Rose Creations dies and popped a brad in the centre. I added this to the centre of my bow and also added a couple of crystal decorative stick pins.