Here's a card that was a demo on yesterday's Spellbinders Show. 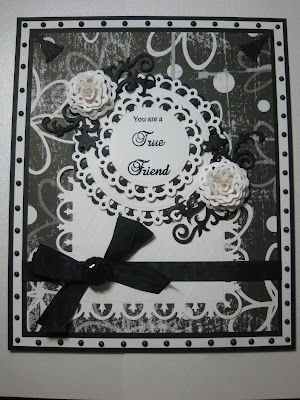 I cut the largest and the next largest of the Picot Edge Circles out of black card. I stamped the sentiment from the Creative Expressions Beautiful Wishes Stamp Set onto white card using Jet Black Archival and embossed with Cosmic Shimmer Clear Embossing Powder. I cut it out using the second largest of the Picot Edge Circles and cut another large circle out of white card. I glued the two large circle die cuts on top of each other, twisting slightly and did the same with the two smaller ones. 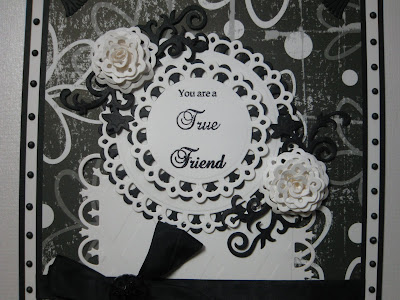 I cut a large Fleur de Lis Rectangle out of white card and at the emboss stage I added a Trellis Mask (remember to keep the cut side of the die away from the mask). 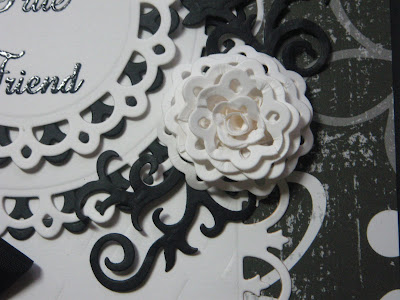 I made the flowers from the second smallest Picot Edge Circle (I showed how to make it in the show). The 'leaves' are cut from the Bird Flourishes die set. The corners are cut from Banner Basics Three.

I assembled the card as shown. I added some Black Vintage Ribbon, a fab button that I bought from Sam Poole's shop and some dots of Cosmic Shimmer Pearlescent PVA in black all around the edge. The backing paper is Junkitz Basics Floral Black. 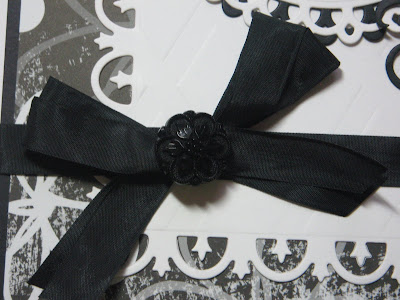 Hope you can join me this evening at 7pm for another Spellbinders Show on Create & Craft.